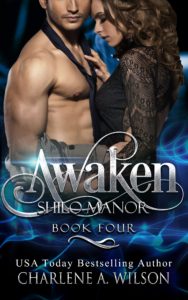 Chunks of dirt exploded and nettled Rhune’s essence with thick clouds of dust. He veered right, tugging his elements so tight he risked forming into his solid body. The ghost of his cloak flew before him with the sharp turn. Too tight. Not good!

Darting back at an angle, he stumbled over himself, sure to disperse more fully. Using the Smoke of Night, easily seen in daylight, hardly helped. But it was a darn sight easier to speed away and disappear among the trees than trusting the speed of your feet. Especially against the likes of them. Shadow swallowed him with a soft swish, and he thanked the gods for the woodland canopy.

A canopy owned by the family of the blasted one hunting me!

Slowing to hover at the crown of an oak, he positioned himself within the fingers of the thick limbs. He scanned the leaf-laden ground, looking for any sign of a ripple in the air, sudden indention in the terra, slight crackle in the soundwaves. Anyone who didn’t know of them, would never imagine, never search. But, he knew. And they knew of him…of them, the Sentinels to the Arched Spectrum of Realms.

Never mind they had returned to Midway Summit to fix things; to set a prophecy straight. As far as the Elves were concerned, the very existence of the Sentinels in their dimension only meant it was time for revenge. Revenge for the acts Sylis Shilo had put into play before his death. Acts that had caused he and Lilith, Sylisan’s own wife, to take part to bring some sort of salvation to the poor bastards involved.

Damnit, brother. Why couldn’t you just let nature take its course. Those who breached the portal would have gotten what they deserved. And I wouldn’t be left to fulfil the prophecy with your son and an untrained young enchantress… He bitterly gnawed on his nonexistent cheek and then finished his thought with a clip. The reincarnation of Lilith herself.

Air beneath him rippled, and Rhune unconsciously jumped back into the leaves. The outline of a slender man appeared, and fine details quickly took shape. Special abilities aside, Rhune’s brawn could snap that little frame in two.

Hell, I could manage more snapping of that fair-haired boy even if he had full use of his special abilities and mine were non-existent. Rhune sneered within his dusty Smoke of Night disembodiment. If not for the Covenant.

But, the Covenant must stand, call for revenge or not.

“No.” The gentle voice held the sound of authority, and in a flash, the woman appeared. Her thick white hair hid much of her body as it brushed her shins. If it were in question, Rhune would guess it served as her clothing. She tossed it aside as she stepped before the man and then grabbed his arm. “Let him go home, Chase. Now is not the time, and you know it.”

Mentally clearing his throat, Rhune tried to look anywhere other than at the Fae woman—which was impossible in his disembodied state. Definitely serves as her clothing.

“Return to your people, Sentinel,” called the pale twig named Chase. “Tell them of this day. I tire of chasing you all over the countryside. But know this.” He turned, allowing the line of emblems down his arm to show. “We have more than this land to throw at you should you get in the way. We will see the return of our chosen ones.”

Rhune knew exactly what he meant, and he believed him. Granted gifts at birth by their Gods, no native stood without something to help them navigate their courses through progression. Whether to help them hold their own against positions in the Spectrum far more advanced, or to test the beings to see how they would use their abilities, the midway dimensions homed peculiar children. Still, children with gifts needed to learn how to play with others just as anyone else.

He tires of chasing me around the countryside? Rhune scoffed, and his essence bulged. I tire of letting you. If only he could have retaliated, even a little, he’d feel much better about the whole ordeal.

He scanned the emblems branded into the flesh with knots of precious metal and wondered who called for such a show of standing. His conclusion knocked the small Elves down several levels on his personal scale. Why the outward show of entitlement? It reminded him of a child’s need to stand out from his peers by winning a race and wearing his medallion of placement at all times. The High Elves of Moraine he remembered never required such to know their worth.

While their examples of great service and sacrifice inspired the multitudes at the time, it appeared to be lost to this generation. A flush of regret flew through Rhune. Their abilities to understand the bigger picture, to see beyond their own needs, always rubbed him wrong, considering the bid Sylis had placed at their feet. He had known they wouldn’t refuse, and Rhune had to look away when they agreed to help.

They were too good for this plane. For these, their people.

Pulling is elements together to allow full view of his upper brawn—shirt be damned, and coiled muscles bulked—he allowed his ebony gaze to penetrate the man’s being. Causing his hips and legs to remain a dark mass to propel him forward may have been purely to show off, but he could embrace that. Chosen or not, their kind were babes in the grand scheme, newborns in one of the youngest positions of the Arched Spectrum. They’d do well to remember that.