I couldn’t believe it when I saw this picture.  When I viewed the house from other angles and discovered it was even bigger than what we see here, knew that I’d found my Shilo Manor.  I can imagine Cole pacing the porch as he waits for Vincent to show up.

Cole paced the length of the front porch with an irritated scowl. His spiked stride made audible his frustration and in his annoyance, he found pleasure in that fact. He cuffed at the folds of his cape as he made another turn and looked down the drive to the iron gates. Wide shadows thickened to blanket the grounds enclosed by the estate hedge of Shilo Manor. The sun dipped behind the city’s tall buildings and cast an orange halo over the silhouetted skyline. Tiny lights that shown from the structures blinked out in observance of the curfew. 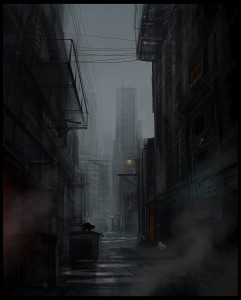 Yes, the alley where Cole and Anna’s story begins.  This picture is the one shown on the cover of the book.  We did darken it since it all happened at night.  *wink*

She turned to the way she came and stared at the forms as they overtook the narrow alley. A man led center, his companions flanking. Each unified stride caused their capes to furl with controlled motion. bleak lamp lit their approach—a dark trio. Reapers, all of them—black hair, black eyes, black cloaks. “Curfew breakers are never seen again.” At that moment, she believed.

Her body trembled and she backed into a corner for support. “This is a nightmare.” Her shallow voice quivered and sent denial through her. “This isn’t happening!” The tomb-like closure briefly echoed her claim but the measured steps resounded as they approached.

Shilo Park was a joy to imagine.  But when it came to setting the stage for Elaina to appear, I wanted it to be a little fairy tailish.  She has a youthful innocence about her, something that Vincent loves about her…

Launching into a jog, he dodged a pair of lazy walkers and then followed the footpath around a gentle bend. Elaina stood at the rise of Center Creek Bridge and he paused to take in the sight. A smile inched up his lips. Could it make a better scene for a storybook?

A cobbled arch stretched over the water with banisters of columned whinstone. Her lightly freckled complexion framed bright blue eyes and strawberry blonde curls tumbled down her slender back. As always, she wore a dress that screamed “I’m a modest young woman and as sweet as they come.”  The charm tugged at Vincent’s heart.

A cool breeze washed across Cole’s face as he sat beneath the apricot tree in the front yard. Dim lights of the city cast a weak halo on the skyline, a sad contrast to the once-vivid spectacle of nightlife. Their metropolis looked old, withered. Bitterness gnawed at him. The curfew. Was the law just a step in Dressen’s plot to get what he wanted? How else could he ensure that they would consider an individual with a home and a job their next potential harvest subject?

He drank a lengthy swig of liqueur from the bottle in his hand. The strong mix seared his throat and heat pulsed through his chest. He growled the sensation away. Leaning against the tree trunk, he crossed his ankles and scowled. The ancient covenant gave the lawmakers the right to run their domain as they saw fit. But to abuse the power for personal gain breached the gods’ intent—how could he have allowed time to influence his view of the matter?

He looked at his brother. He could hardly make out his profile as he sat five feet from him. It was so dark under this realm’s night cover. Nostalgia tugged at his heart. Meridian’s five moons ensured a constant glow of light indigo as they reflected blue sun rays over their home. Even at night, it was bright enough to see without aid. 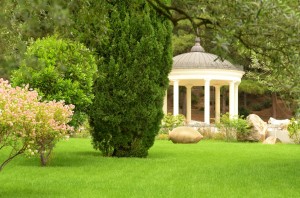 Belvedere near the topiary