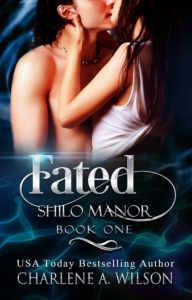 Cole unstopped the slender vial and gently lifted Anna’s head to administer the potion. As he carefully tipped the container to her lips, tremors traveled down his forearms. His hands quaked, and the amber liquid jumped to the brim. He quickly tilted it upright. Gods, Cole, control yourself. She needs every drop.

A soft palm rested on his wrist, and Cole’s gaze shot to Elaina’s. When had she returned, and how did he not pick up on the strong compassion emitting from her when she had? Her blue eyes looked deep into his; understanding with a touch of sadness. “Let me do that, Cole. You’ve been through enough.”

He wasn’t sure if the tremors were from anticipating a fortunate outcome or from sheer anxiety over the whole ordeal, but he accepted her tender attention as a blessing. Vincent’s intervention with her was evident.

She patiently poured small measures into Anna’s mouth and then turned to Cole, lifting the emptied container. “Well, that’s it. She got it all.”

“Anything, Cole.” She smiled and set the vial on the bed stand. “What about you? Can I get you a drink? It might calm you some.”

Nodding, he offered a small smile.

As she closed the door behind her, Cole eased onto the bed. “Don’t give up, Anna.” The silence of the room swallowed his faint words. “I’ll fix this and see to it nothing ever happens to you again.” Brushing his fingertips over her hair, he solemnly whispered a plea. “Don’t leave me.”

Her soft locks sent countless memories rushing through his mind. Her smile, her cheeky comments, her blue eyes dancing as if life itself was a game. Her Arylinite spirit embraced every moment of love, able to see beneath façades that others deemed as truth. He sighed, knowing that side of her may have been unique to that lifetime—a result of her specialized upbringing in the Arylin colony of the northern territory.

He tilted his head and gazed over her still face. Her features were remarkably similar to Mianna’s: The gentle slope of her nose, the way she chose to wear her dark hair long, and he couldn’t deny her blue eyes when she’d looked at him.

He cupped her cheek with his hand, gently stroking her lips with his thumb. They curved from a bow-tie center into a natural smile. So, soft. Inviting. He leaned to her and lightly kissed them, then leaned his cheek to hers.

“Talk to me, Anna.” His breath was a plea. As much as he knew no answer would come, his heart called to her with his deepest wish.

He brushed his fingers down her neck to her chest, tenderly caressing the pale skin at the neckline of her gown. A strained pause caught his throat as he lightly followed her breast to her ribcage. “What’s in your heart?”

The tiny circles he drew on the thin fabric fed his longing for her touch. Supple creases followed his motion. To have her arms around him, the love they brought, had given him unmitigated comfort in a past life. It could be so again.

“My life was yours.” He kissed the circles he created. “Every moment, I found joy in you.”

He looked at her closed eyes. “Please, don’t leave me. Please promise you’ll be mine again.”

No emotion showed upon the visage of his love, but distant echoes of vows lighted his soul.

“Open to me.” He wondered if his whispered thought could possibly reach her unconscious mind. “Speak to me with your soul.”

Her lips parted, and a chill flew through him as weak sensations touched his senses. “Anna,” he said aloud, hope rising. He cupped his palm to her cheek again. “Fight for it. Call to me.”

Cole’s heart ached. Yet, that small reaction spurred his resolve. He framed her face as he lowered to take her lips with his. “I’ll help you.”

The scent of licorice and cream fell from his lips as he called on his Breath of Zephyr. His soul’s voice owned his words. “My life is a mirage of endless time. But you engulf me, rivet my mind, encompass my soul.”

She inhaled his sensual gift and gasped for deeper intake.

Yes. Hope impossibly filled him. His muscles tightened with expectation. His heart pounded against his chest. “Call to me!”

Quick taps sounded from the door, and Elaina opened it a crack. “Cole, um, Lord Dressen is here to see you. And,” she glanced down the hall, “he has others with him. They refused the parlor. They wanted to wait in the foyer. They don’t look happy.”

Cole released his breath and clenched his teeth, quickly looking over the quiet face of his love. Of all times for interruption.

He glanced at the clock on the bed stand. Five o’clock a.m. He figured he’d be contacted at some point, but this was sooner than expected. “Stay with her, Elaina. I’ll take care of this.”

Cole kept his stride steady as he descended the staircase. James and Vincent stood beside the banister Sentinel to his left. Dressen mumbled to his comrades in the center of the hall. Five accompanied the lord, each a highly ranked Grand Marshal. Elaina was right. They weren’t happy. A strong sense of ill-affect echoed from the group.

Curving his lips into a congenial smile, he walked to them. “Lord Dressen, I trust your celebration was a success.”

Dressen turned without pleasantries and stated his purpose. “Where is she?”

“You know damn well what I said. Where is she?”

Taking a deep breath, Cole leaned his head toward the lawmaker. “I can only assume you’re speaking of the young woman you escorted to the event.”

“You were the last to see her, Sir Shilo. The guests told me the three of you left directly after you entered from the terrace.”

Cole glanced at the gathering, several of whom he recognized as guests in the ballroom when they exited. “And I’m sure they also informed you that we left alone. I wasn’t aware you put her in my care while you explored the extents of the gift.”

“Then why would you think I would know of her absence?”

The lord huffed and looked away. “Well, she’s nowhere to be found.”

“I’m certain she merely wandered onto the grounds.”

“We’ve checked the grounds! We’ve checked everywhere.” His gray gaze carried a commanding glare as he looked into Cole’s eyes. “I want her found and returned to me by midnight tonight.”

Cole raised his brows. “A re-harvesting?”

“Call it what you like, my bid will be filled.”

He shifted his stand and clasped his hands, lifting his chin. “I must say, Lord Dressen, this is unusual. Once a bid is satisfied, the trade is complete.”

Dressen’s features went livid. “If I find any cause to suspect your involvement in her disappearance, I’ll have the entire court of Grand Marshals on your backs! This order was bid in faith of an honest transaction.”

A sizzle ran the length of Cole’s spine as the circumstances surrounding Anna’s harvest tainted the words. “Indeed.”

“By tonight, Sir Shilo.” The lord turned and marched out the front door. Several gazes sent judgment Cole’s way before the group followed.

As the door slammed, he looked at his brothers. “That was quick. It seems I overestimated his love of the gift.”

James cocked an eyebrow and set his hands on his waist. “At least we got her here. He can’t prove anything unless they search the house.”

Vincent huffed. “And that’s not happening. They have no authority here.”

Elaina’s voice cut through the conversation and pulled Cole’s attention to the top of the stairs. “What is it? Is something wrong?”

“She’s awake.” Elaina motioned down the hall. “And she’s scared. Cole, she is asking for her Keeper.”

Heavenly relief flooded Cole’s being, and he darted up the steps, down the hall, and through Anna’s bedroom door. Her gaze snapped to him and didn’t vary as he slowed his approach and sat at her side. “Anna? Are you okay?”

Confusion, fear, comfort, and then confusion again resounded through him as her emotions touched his. He brushed his fingers across her cheek and looked deep into her blue eyes as he reclaimed his position. “Anna, I am your Keeper. Don’t be afraid.”

Her chest heaved a heavy sigh, and she drew her hands from the thick layer of covers. Wrapping her arms around him, she pulled him close. Warmth flooded him as her instant contentment flooded his soul. Sweet hope swelled in his chest. He had her in his arms and nothing would keep him from correcting this wrong.